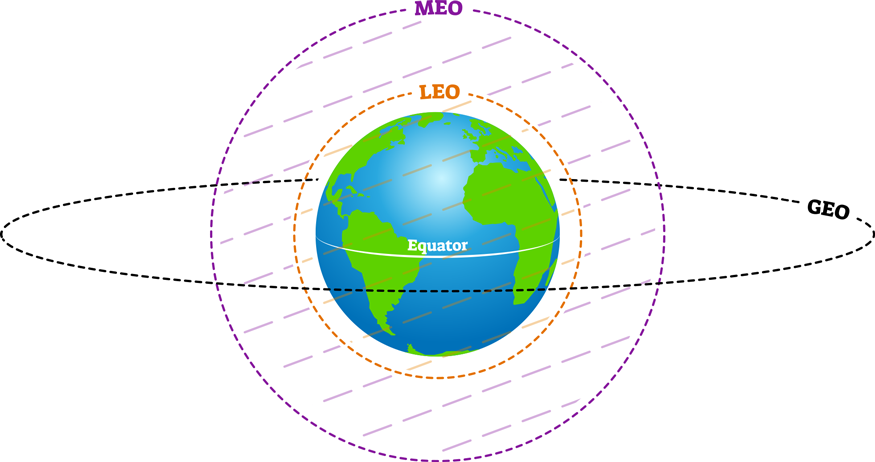 LEO/MEO satellite networks are often well suited to mobile applications, where you need to use the service while on the move. LEO/MEO external antennas used on vehicles, vessels and aircraft are generally smaller and less expensive when compared to Geostationary satellite antennas.

Geostationary satellites are generally larger and require more power than LEO or MEO satellites as they cover a much larger area of the Earth’s surface.

Geostationary satellites generally have superior data bandwidth, but since the satellites are around 35,000 km above the Earth's surface they often experience greater latency or voice delay when compared to LEO and MEO satellites. When using Geostationary satellite phones and terminals in a mobile environment it is preferable to have a high elevation angle, as the terminal works better closer to the centre of the coverage area.

If you require the data bandwidth of a Geostationary satellite service as well as mobility, there are sophisticated antenna options available.

Pivotel products that use GEO satellite networks include all Inmarsat, Thuraya, Intelsat and nbn™ satellite solutions.

Easier to use and more affordable to call

More choices for a solution that meets your needs

Suspend your service when you’re not using it*

Control your costs with email and SMS notifications

The Intelsat satellite network provides secure, high-speed internet services when and where you need it.

Pivotel’s private mobile networks are designed to meet the connectivity requirements of a property or region.

Do you want to know more about a Pivotel service plan, product or solution?
Ask our friendly Customer Care team here.

Did you know that we have a nationwide dealer network of over 160 dealers?
Find your local Pivotel critical communications expert here.

Find a Dealer near you

Want to stay in the loop?

By submitting your email address, you agree to receive future emails from Pivotel